In a dispiriting diagnosis that might almost be crafted for Haiti (as well as some other, economically more significant, developing countries in the Americas), Fukuyama says that neither democracy nor markets can flourish properly in the absence of a competent state. 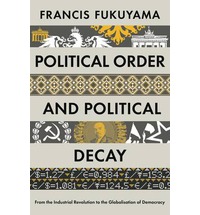 Explaining the premise of the book to the BBC’s Stephen Sackur recently, Fukuyama said that state institutions are very difficult to establish and the failure to do so makes it harder to sell democracy.

But he didn’t sound especially devastated about this, which might sound odd for the man who wrote ‘The End of History’ 25 years ago. It was this book more than any other that marked the presumed final ideological triumph of free market liberal democracy, as the Berlin Wall fell and the Soviet Union crumbled.

But then Fukuyama is no longer so sure that the world’s direction of travel is liberal democracy. “In the last 25 years, I’ve come to understand that democratic institutions are very difficult to establish, and particularly state institutions, where you can govern without corruption, where you can deliver services and things that people really want are something actually very rare in the world,” he told the BBC.

And it’s not just the West vs the rest. Southern Europe, he points out, lags way behind the northern part of the continent, with obvious consequences for democracy.

For, state incompetence dulls a people’s desire to make their will known through their chosen representatives. An exceptionally ham-handed administration can actually subvert democracy, in the sense that it begins to seem totally unviable. That could be called ‘getting to Cairo’. The incompetence (and incomprehension) of Egypt’s democratically elected Muslim Brotherhood government, forced the country’s middle class to return to authoritarianism.

Might Haiti be part of the way to Cairo, hurtling towards presidential rule by decree, in the absence of elections and a competent state apparatus? Just recently, there’ve been especially dark media reports on President Michel Martelly’s response to a question posed by ‘Le Nouvelliste’ on the consequences of no elections: “If by the second Monday of next January there is no compromise, and if on January 12 the Parliament is suspended, there will still be a President in power, and he will lead the country; we will do everything that we have to do.  I am the President of a country, I must deal with all eventualities.”

All eventualities, but presumably not the competent provision of services for the Haitian people, in a way that would reinforce the public’s appetite for democracy.