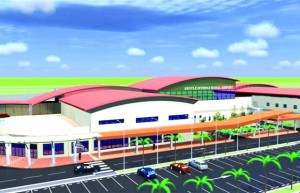 Cap Haitien “International” airport opened in northern Haiti on Thursday, with an American Airlines plane flying in from Miami. Using the hashtag #“PwomesseDet” (a promise is debt), President Martelly tweeted the moment.

Undoubtedly a significant moment for Haiti, the first arrival of a major commercial flight in any Haitian city other than Port au Prince.

But does an airport become “international” just because it receives flights from overseas?

The photos being tweeted by Haitian Prime Minister Lamonthe seemed to focus heavily on the turquoise chairs in the terminal rather than anything else. When I was last up in Cap, barely three months ago, there was no sign of the shiny developments signified by the bold re-branding.

Le Nouvelliste’s rendering of the airport (above) is an artist’s impression of tomorrow. Or day after. Whenever a Haitian plan comes to fruition, really.