East is east & west is west, never the twain shall meet, clotheswise 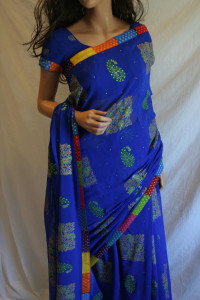 Never mind the carping from some sections of the Indian social mediaverse, Kiran Desai’s comments on clothes and the east-west divide are spot on.

Each half of the world demands its own wardrobe. There’s good reason various Western governments devote space and time to pointing out the need to “respect local dress codes”. Click here for the British government’s warning.

Anyway, being a writer, Ms Desai talks in more philosophical terms about the difference between Indian and Western clothes. If you arrive in India in Western garb, she tells The Guardian, “Everyone comments on how awful you look right away. The sky is different, the street is different, the dust is different – only Indian clothes work.”

She describes the complex “code of symbols” of Indian saris. “They’re so complex. The wedding sari will have its own special symbols – it’s this huge code. They’re beautiful. The plants and shells and creatures and birds … I miss that, because in America, you don’t have animals all over your clothes. Well, you do sometimes, but I’m not a fan of leopard print.”

She laments having to give up Indian clothing because she lives in the West, saying they’re “really time-consuming” to maintain.

But there are other reasons. In the West, often look too flimsy, flap too much (if you’re running for a bus, getting on to trains) and feel too cold.

Unless worn for a special occasion, they generally seem the wrong colour and too differently patterned. Blacks, grays, blues, browns, greens and reds seem to suit the quality of light in the northern latitudes. India’s vibrant silken turquoise, gold, pinks and other shimmery colours are simply out of place.