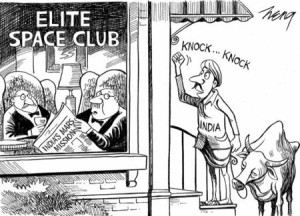 As an Indian, I am entitled to say this. As an Overseas Indian, probably not.

Continually being offended may be a sign of low self-esteem. Not low self-confidence, just dismal self-esteem.

So, to the angry complaints about ‘The New York Times’ cartoon on India (see above).

Click here to read the BBC report on this.

The cartoon showed a dhoti-clad farmer, cow in tow, knocking on the door of a room marked Elite Space Club. Inside, sat two men in Western business suits, reading a newspaper that recorded India’s extraordinary achievement, ie putting a robotic probe on Mars at little cost and with seemingly little trouble – success at first go, better than any other country so far.

Andrew Rosenthal, Editorial Page Editor of ‘The New York Times’, hastily explained on Facebook, that the paper and its Singapore-based cartoonist never intended to “impugn India, its government or its citizens”. Instead, the cartoonist wanted to “highlight how space exploration is no longer the exclusive domain of rich, Western countries”.

That’s true, isn’t it? That last sentence? India’s space programme has made it possible for poorer countries to boldly go wherever they please.

It’s hard to see why it was racist to portray a son of the soil and a cow (dharti-putra and gao mata). Are they not still somehow symbolic of some parts of Indian reality? Surely it says something that the pair are portrayed boldly seeking entry (by right and with no apparent nervousness or shyness) to a hitherto-clubby little group?

The newest example of Indian prickliness came barely a week after great outrage over The Economist’s blog on Prime Minister Modi’s visit to New York. The piece – initialed, as is usually the case with Economist blogs – was derided as racist and condescending. The Economist was forced to clarify one particular focal point of the anger, but vilification of P.F. continued.

P.F, as some of the angriest people pointed out, was Patrick Foulis, The Economist’s New York Bureau Chief and US Business Editor. He was formerly India Business Editor and based in Mumbai. This made it possible for the incensed to be especially excoriating about white people’s “pearly anatomy”, among other choice, racially angled insults.

“What is it about foreign correspondents that makes them believe they are the ultimate authority on India, because they happened to have lived here for about three-four years?” asked Swarajya mag, clearly having a virtual apoplectic fit. “Is it because the sun shines through a certain body part of their pearly anatomy more clearly than it does through that of their ‘native’ counterparts?”

I suppose the answer partly lies in the question. Or the fact that it was asked at all. Foreign correspondents covering India do think their reports may be taken more seriously than those of their ‘native’ counterparts. This, because most Indian media outlets spend little time, money and effort on getting – and providing – the best possible news and views content possible. It’s good in parts. And bad in parts. Indian newspapers and magazines are not a must-read for work or pleasure for large swathes of the world, other than the Indian diaspora and foreign academics, diplomats and businessmen professionally interested in India.

Not so ‘The Economist’. Or ‘The New York Times’. They know, and so do we all, including the outraged amongst us, that these outlets have a global readership. And that they’re considered authoritative. Good press in those outlets is worth more than a big and expensive PR campaign. Or a hagiographic piece in an Indian paper.

But one has to wonder if bludgeoning bloggers and cartoonists into submission is the way to get good press. It’s not a good idea to turn India Striving into a hands-off, let’s-leave-it-alone subject along the lines of the Prophet Mohammed cartoons, which enabled some to whip some intemperate people into dangerously ungovernable rage.

India is bigger than that. And admirable in ways that may not seem to be covered by a blog or a cartoon. It can handle it.