Both are spread through bodily fluids, but is Ebola really the next AIDS? 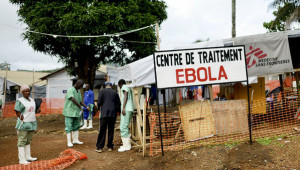 Dr Tom Frieden, director of the US Centers for Disease Control and Prevention says Ebola is not really the “world’s next AIDS”. Not yet. But it is “like” it.

In a grave statement – that must surely have sent chills down the collective spines of public health systems in many countries – Dr Frieden said that in the 30 years he’d worked in public health, “the only thing like this has been AIDS”.

It was probably the right thing to say, at the right time and to the right people. Dr Frieden was speaking at a World Bank and International Monetary Fund annual meeting in Washington, D.C., where many countries pledged funds and services to try to stem the virus ravaging West Africa.

“And we have to work now so that this is not the world’s next AIDS,” he said.

The reference, analysts said, was to the slowness with which the world recognized the tragic potential of AIDS, which like Ebola, started in Africa.

(Tomorrow, ‘Could Ebola be the making of Nigeria… or at least tool of its rebranding?’)