The Nobel at last. With every foreign plaudit, Malala more suspect in Pakistan 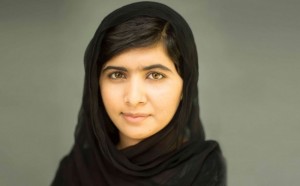 Reprising somewhat a blog from this time last year, but highly relevant this Nobel season.

Now that Malala Yousafzai has received the highest honour possible, it might not be a bad idea to look back to early October 2013. It was Nobel Prize time and everyone was in a fever of excitement about a possible Malala win.

At the time ABC newtwork was twhooping (whooping via twitter) that it was ‘Malala Week’ for them.

The BBC was using the October 7 anniversary of the Taliban’s attack on Malala to interview her. Sixteen at the time, she confidently (and rather self-importantly, perhaps) described herself as a campaigner for education, a children’s rights activist and a women’s rights activist. Within days of the BBC interview, Malala was hobnobbing with the great and the good at a Buckingham Palace reception hosted by the Queen.
The Nobel is just the latest in a series of honours heaped on a young woman who nearly died at the hands of bigots for the crime of wanting to study. Last year, Malala made a landmark speech at the United Nations and she has been honoured at Harvard University and in her current home in Birmingham, UK.
But with every foreign prize, every news story, every preferment, Malala becomes ever more alien and suspect to Pakistan.
In last year’s BBC interview, she defended the West as more than “short dresses and skirts”. She said such garments do “not mean they (the West) have a different ideology.” It is a plea for tolerance that is likely to be misrepresented and profoundly misunderstood.

On the BBC’s Panorama programme, also broadcast last year, Anglo-Pakistani presenter Mishal Hussain returned to the valleys she herself had once known as a child on holiday. In Swat, she found Malala’s former classmates proud of her, but almost everywhere else, particularly in Islamabad, there was suspicion of her prominence in the West. Even Sartaj Aziz, urbane and so much a man of the world, was doubtful about Malala’s relevance to the debate about education in Pakistan. Mr Aziz, the Pakistani prime minister’s adviser on national security and foreign affairs, refused to describe her as a national embarrassment but insisted she conveyed an inaccurate picture of girls’ education in his country. “The image it created…is not true,” he said.

It’s hardly new, this tendency to shoot the famous messenger, especially one who brings bad news. The parallel is not exact by any means, but remember Aravind Adiga’s Booker Prize-winning novel ‘The White Tiger’, in which he brilliantly captured the unspoken voice of people from “the Darkness”, the impoverished areas of rural India? India Shining didn’t like it.