UK vote on recognition of Palestine. All change then? Extremely unlikely 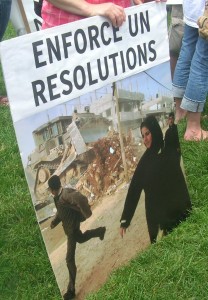 The UK is expected to vote on recognition of Palestine after parliament’s summer recess ends today (October 13).

It’s hard to be positive about the Palestinian issue, especially when someone like Noam Chomsky, with his fierce intellectual curiosity, analysis and fearless gaze, regards the latest ceasefire between Hamas and Israel as just another dispiriting part of “a regular pattern since the first such agreement was reached between Israel and the Palestinian Authority in November 2005.”

Professor Chomsky, whose writings over four decades are now newly available in the form of an anthology (‘Masters of Mankind: Essays and Lectures, 1969-2013’) recently described the results of the regular ceasefire agreements as follows. In an interview with TruthOut he said:

“Each time, Israel has disregarded the agreements while Hamas has lived up to them (as Israel concedes) until some Israeli escalation elicits a Hamas response, which gives Israel another opportunity to ‘mow the lawn’, in its elegant phrase. The interim periods of ‘quiet’ (meaning one-way quiet) allow Israel to carry forward its policies of taking over whatever it values in the West Bank, leaving Palestinians in dismembered cantons. All, of course, with crucial US support: military, economic, diplomatic and ideological, in framing the issues in accord with Israel’s basic perspective.”

(Tomorrow, ‘Peace in our time? Noam Chomsky remains fierce but not without hope’)