Vice News: Like somebody taking a selfie in front of something important? 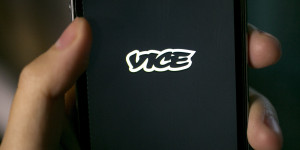 I don’t know about you but Vice News snuck up and lodged itself in my consciousness. It happened a couple of months ago. I’d been hearing those snazzy creatures, the millennials, rave about Vice and then suddenly, it became the talk of newsrooms in the mainstream media.

As John Schwartz put it in The New York Times, Vice Media was “once a Canadian magazine with a bad-boy vibe that has turned itself into a powerhouse online and on HBO.”

For good reason it seems. Young people said they liked its documentaries – from impenetrable North Korea and faraway Ukraine. Even older bods were impressed that Vice was able boldly to go where other, greyer media outlets would not. For instance, it filmed inside Islamic State-controlled territory in Syria. The markets were dazzled by recent investment in Vice, which received $500 million from the cable network A&E and Technology Crossover Ventures. This fund has also invested in Netflix and Facebook. The result: Vice is currently valued at $2.5 billion.

So far, so brilliant. The problem, as Mr Schwartz cannily points out, is the mercurial attention of the millennials. They “are hot, hot, hot,” he says. But seemingly fickle.

Using a thin sample of his own millennial progeny, Mr Schwartz found that the age group stubbornly sticks to individual preferences. It is not a clump of conformist thought (surprise?).

The second, 24 years, described much of the content as “clickbait” and “overcompensatory”, which is to say it compensates overmuch for “not having all that much to say”. More damning still, Mr Schwartz quotes the young man complaining “that Vice might go all over the world, but that the stories all seemed to be about Vice going all over the world. ‘It’s like somebody taking a selfie in front of something important’.”

The youngest Schwartz child, 18 years, damned Vice as too “mainstream”, the exact criticism I’ve heard from 20-year-olds in this season of Vice’s soaring popularity.