Bitcoin, like mobile telephony, may help poor countries leapfrog ahead 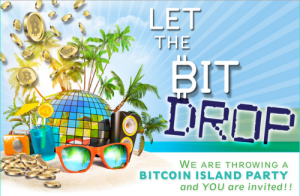 On March 14, 2015, the poor island of Dominica will become the world’s first country to have a universal digital currency. For one day at least, and for free. Every one of its 70,000 inhabitants will receive $10 worth of bitcoins gratis. To spend as they want. The Dominicans will, thereby, make history. Yet again. Their roughly 300 square mile island was named by Columbus himself, as he sailed by one Sunday during his second voyage in 1493.

Anyway, back to the great Bit Drop, which is being trumpeted as a unique, full-island party that just happens to coincide with Pi Day.

So what’s it all about? As OZY explains, it’s an experiment to put Bitcoin to work across a whole country and the idea was thought up by Coinapult , a for-profit company based in Panama. Coinapult provides the technology needed for the mobile “drop”. The Dominican government has given the scheme its blessing. There are other sponsors, including Aspen Assurance, an educational nonprofit College Cryptocurrency Network, Bitcoin Beauties and Free Talk Live.

The idea, it seems, is to demonstrate bitcoin’s unsuspected usefulness for developing countries. Dominica, which is a poor, small island, doesn’t offer much banking infrastructure to its people. Bitcoin’s promoters say the cryptocurrency could help countries like Dominica leapfrog into a 21st-century digital economy. Like mobile banking in Africa. And mobile telephony in India, Bangladesh and everywhere really.

Bitcoin’s virtues include many negatives. It is not like mobile banking systems – they only work within national borders.

It is not like PayPal, which charges merchants to receive payments.

But will it work? For Dominica, Haiti, elsewhere? Pi Day will tell.