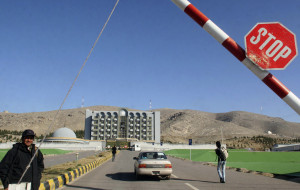 By now the US Consulate in Herat, Afghanistan, will have moved from its plush, five-star location to a military camp and with it goes some of the good news narrative so determinedly put out in the run-up to December’s NATO-ISAF withdrawal.

That Consulate was always an anomaly – a vast, marbled, relatively luxurious location that sat uneasily in the city – ostensibly open but with badly boarded-up windows. When I stayed there, around the time it officially opened in June 2012, I found it exceedingly discombobulating. You were handed a key that had obviously once served a hotel; elevators whisked you up and down the multi-storeyed building; the roof had a lovely terrace just right for long evenings of nosh and natter; carpets stretched down the corridors; you were served limited but excellent fare. But everywhere clumped military types (except for a few of us civilians); security protocols had necessitated ugly and awkward changes to the hotel rooms; iron rods closed off parts of the roof terrace; the dining room was the DFac (Dining Facility, as in all Mission warzones).

The Consulate’s withdrawal to ISAF Camp Arena was inevitable. It was badly damaged in an attack in September 2013. For all the attempts (and an estimated $80 million a year) to secure it, even back then when I was there, it was obvious a five-star hotel could never really serve the needs of a high-security diplomatic mission.

But it started diplomatic life with such high hopes, as Diplopundit, the anonymous American Foreign Service blogger, reminds us.

In December 2009, writes Diplopundit, the then US Ambassador to Afghanistan, Karl Eikenberry signed the lease for the property, underlining is significance as a hub to cover the four western Afghan provinces bordering Iran and Turkmenistan: Herat, Badghis, Ghor, and Farah. At the time, he declared, “…when we first identified properties that might serve as a future US Consulate, the 5-Star Hotel property literally stood out as the most logical and usable space to lease until we could buy land and build a more permanent Consulate compound. Signing this lease today brings us one big step closer to opening the Consulate in Herat.”

When the hotel finally re-opened as the Consulate, US Deputy Secretary of State William J Burns saluted the refurbishment and use of local products, including “world-class quality, Chesht-e-Sharif marble”. He admiringly referred to the fine deliberation of America’s creation of this Consulate – an expert Afghan carpenter, he said, “turned plain packing crates into beautifully carved room dividers.” He concluded, “Let this building stand as a sign of our commitment”.

Now, they seem to have given up and moved to the army camp, perhaps signifying the yawning chasm between honeyed words and Afghanistan’s hard reality.

(Tomorrow: As he bows out, William Burns doesn’t address the lessons of Herat)