As he bows out, William Burns doesn’t address lessons of Herat 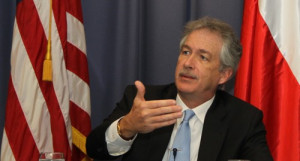 In his wise reflections on 33 years in the diplomacy business, US Deputy Secretary of State William J Burns has spoken of the new “realities (which) pose some real challenges” for professional diplomats.

He summed up some of the new realities as follows: “How can we add value in a world of instant and nearly universal access to information? How important are foreign ministries in an age of citizen awakenings? And who needs foreign assistance from governments when they can get it from private foundations and mega-philanthropists?”

These are important questions but Mr Burns did not, crucially, address the challenges posed by hubris in foreign policy objectives.

Not least the lessons to be learnt from the Consulate officially opened with much fanfare by the US in Herat, western Afghanistan. The Consulate, formerly a five-star hotel, was acquired by the US Government at great expense in 2009. In June 2012, Mr Burns opened it with a flourish, hailing the world-class marble and decorative works within, picking them out as a symbol of America’s commitment to Afghanistan.

The Consulate has since been moved to the safe confines of the ISAF base in Herat, raising questions about the quality of senior American diplomats’ strategic vision and level-headedness about US assets and its footprint.