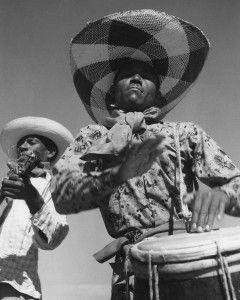 It stands to reason that Haiti features prominently in the luscious new photography book ‘90 Degrees of Shade: Image and Identity in the West Indies – Over 100 Years of Photography in the Caribbean’. With a 10 million population, a stirring and inspirational history and a tragic contemporary story, Haiti looms large in any Caribbean narrative.

Soul Jazz Records published the 12” by 12” hardback on Monday, November 3.

In The Guardian’s photo essay of the best images, a Haitian drummer (see right) is captured mid-sway, in Port-au-Prince, 1950. Thirty years later, an armed and dangerously intense Tonton Macoute patrols the streets of the Haitian capital. To many, the two photographs might sum up the rum and revolution history of the Caribbean.

But that is hardly the full story of that indescribably diverse and luscious region. As the book’s promotional material puts it, the Caribbean has been the backdrop to multi-layered narratives – of tourism and hedonism, a colonial outpost and a revolutionary threat in North America’s backyard. “…from Calypso to Vodou, Communism to Reggae, Colonialism and the Slave Trade, Rum and Revolution, Industry and Tourism… The image of the Caribbean is as much a creation of the outsider as it is the complex identity of its people”.