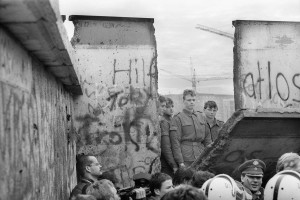 Christian Caryl had a ringside view of the Fall of the Wall. As “a not-quite-yet-journalist” looking for his first big story”, he had sniffed around Leipzig, East Germany a month before the November 9 East Berlin press conference by Politburo member Günter Schabowski.

In his wonderful Foreign Policy piece on the 25th anniversary of the fall of the wall, Mr Caryl describes how he listened in surprise as Mr Schabowski “almost offhandedly” announced that his government had decided to allow East Germans to travel to the West. As he recounts, “when one of the journalists in the audience asked him when the change in the law was supposed to take effect, Schabowski answered: ‘immediately’.”

This was how a member of the Politburo of supposedly the most stable regime in Eastern Europe inadvertently made up policy instead of just declaring it.

As Mr Caryl tells it, “he was improvising; his government was falling apart…everyone in East Germany was watching his performance live on TV, and thousands of them began going to the Wall, demanding to be let through.”

The rest, of course, is history. Mr Caryl, who’s now a senior fellow at the Legatum Institute, which co-publishes Democracy Lab with Foreign Policy, writes, “As the evening wore on, I watched in astonishment as East Berliners, taking Schabowski at his word, peacefully forced open the once-impregnable concrete barrier that sliced their city in two…The Wall looked strong on the outside. But that concealed a basic flaw in its design: It only worked as long as people still believed in its power. Once they stopped, it fell.”