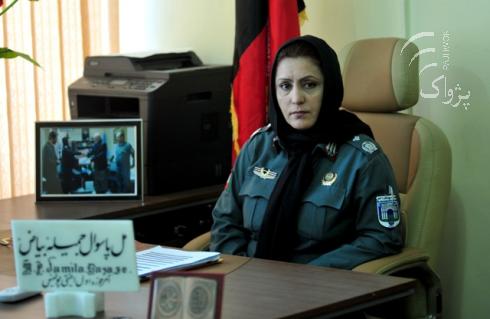 The slew of bad news from Afghanistan makes the good bits shine brighter. Just this week, the United Nations Office on Drugs and Crime offered the dispiriting assessment that opium production was up by 17% since last year. That was a record.

But then comes this glorious, utterly improbable story about Brig. Gen. Jamila Bayaz, the only woman in Afghanistan to become chief of police. OZY followed her around her headquarters, Kabul’s police station number 1.

The police station, says OZY, “rises like a castle from the glittering, stinky chaos of Mandavi Bazaar, protected by a high wall and armored jeeps parked in its yard. Police officers rest with their Kalashnikovs in a small, overgrown garden, while on the top floor of the building an overweight, mustachioed man in uniform sits on a chair guarding an office door. Suddenly, the door bursts open, and the policeman springs to his feet as the sound of his clattering assault rifle fills the air.

“When Brig. Gen. Jamila Bayaz appears, people move. Flanked by four bodyguards running behind her, Bayaz doesn’t wait — for anyone — as she descends a staircase and one of her guards shouts instructions into a walkie-talkie. When she enters the yard, her resting officers leap up. Here, this brigadier general is the boss.”

How did she, a woman, become so powerful? “Simply because I’ve been in the job for a very long time,” is Ms Bayaz’s dry reply to the webzine. She says this, as OZY puts it, “grinding her strong jaw back and forth above the knot of her headscarf”.

Obviously, this is a huge challenge in a country where a succession of senior policewomen has been gunned down in the last few years. According to OZY’s estimates, only two per cent of police officers working in the Hindu Kush region are female. That’s just 2,000 altogether. As the country’s highest-ranking female officer, Ms Bayaz might reasonably be expected to be in the sights of retrograde sections of Afghan society.

That’s the depressing bit of the good news.