Poor America. A lame-duck president is like having older model iPhone 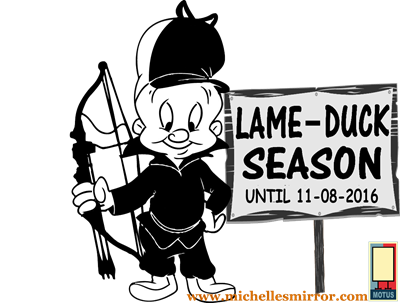 “History suggests that having a lame-duck president is not unlike having an older-model iPhone,” writes Sean Braswell in OZY.

That’s a clever sentence. It’s barely two weeks since the mid-term elections. Ever since, President Obama finds himself further hemmed in by the Republicans, straitened by America’s checks-and-balance, winner-takes-all system, to get even less done in the two years left to him.

So, is a lame-duck president really as obsolete as yesterday’s dream device?

Yes, says Mr Braswell, the  average politician “seems at times like a product himself — a wind-up doll, manufactured out of talking points and poll-tested sound bites and bought and sold as far as campaign finance law allows”.

That said, he allows that even after political death can come remarkable renewal. He refers to the very different obsolescent periods endured by Presidents Woodrow Wilson and Ronald Reagan. Like Mr Obama, both found themselves dealing with a Senate that had changed hands during their sixth year in office.