Lame-duck Obama: Is China climate change accord his Reagan moment? 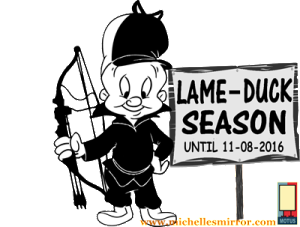 Could last week’s climate accord between the United States and China be President Obama’s Reagan moment?

Remember 1986? Ronald Reagan had just become a lame-duck president but despite the drastic new limits circumscribed by the mid-term elections, he scored big on a key foreign policy issue in close collaboration with Senate Democrats, as Sean Braswell recently recalled in OZY.

The result was approval for – against conservative opposition — a major arms-control treaty, which eliminated nuclear and conventional ground-launched ballistic and cruise missiles with intermediate ranges, defined as between 500-5,500 km. This was a huge achievement in a world petrified by nuclear cold war.

And in Beijing, last week, the Obama administration managed to get the world’s largest emitter to agree to an absolute reduction in emissions, albeit by 2030. It’s the first time that China has agreed to any reduction.

This is a significant foreign policy win as Joshua Keating recently pointed out in Slate. “The Obama administration’s strategy of seeking out international diplomatic opportunities that don’t require buy-in from Congress seems to have worked out quite well for President Obama,” he wrote, even as he admitted that Republicans could still undermine the deal by scuttling America’s own emissions reduction policies. “But no matter the obstacles down the road, between this historic deal and the reduction targets agreed to by the EU last month, it’s been a rare productive couple of weeks for climate diplomacy.”

The worldly wise and weary will shrug their shoulders. US 2014 is nothing like in 1986-87, they will say. They are right, as Thomas E. Mann and Norman J. Ornstein point out in their book ‘It’s Even Worse Than It Looks’. There hasn’t been much bipartisan-ship of late from 2006, when the financial crisis forced George W. Bush and Democrats in Congress to work together.

But hope springs eternal in the human breast. One must hope this is Obama’s Reagan moment.