Why would Indians want to claim the Mona Lisa when we have Ajanta? 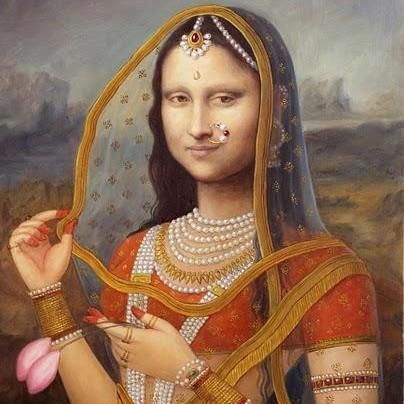 I’ve had ‘Bani Thani’, a recreation of the Mona Lisa by Rajasthani artist Gopal Swami Khetanchi (see right) for years. It’s only the torn-off cover of an art catalogue. I was sent it sometime in 2009, when I was editing The Sunday Times of India. I liked it so much I’ve carried it around the world, putting it up wherever I’ve been (Delhi, Kabul, D.C., Port au Prince and now here, in Abu Dhabi). I cannot explain why I was drawn to it other than the subtle charm of Mr Khetanchi’s unaffected re-imagining.

I was reminded of Bani Thani when I saw this extraordinary post on Facebook, purporting to come from Subramaniam Swamy, the unrestrained Indian politician who is sadly loathe to keep his opinions to himself.

“Did you know Mona Lisa was an Indian and her painting was done by our Hindu ancestor in 3000 BC, It’s actual name was Mona-li Shah, But unfortunately Italian Christian Missionary Leonardo da Vinci stole this painting in 1506, Looted all the precious stones embroidered on the Saree and replaced her Saree with a missionary dress.”

Was it a joke? Or just another misguided attempt to assert the superiority of Indian thought and action – by laying claim to some of the greatest treasures of the Western world? Why would we want to when we have the unique Ajanta paintings?