Abu Dhabi: Wrapped in the flag on the UAE’s 43rd birthday 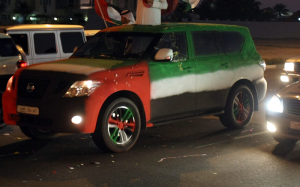 Today is the UAE’s National Day, the 43rd since six small states decided to join together in one union, with a seventh following soon after.

Abu Dhabi is bedecked in red, green, white and black, the colours of the national flag of the United Arab Emirates. Everywhere, there are expensive cars sporting decals of the leaders of the seven emirates or just the main three (the president, who’s the ruler of Abu Dhabi; the vice-president who rules Dubai and the union’s founder, the late Sheikh Zayed). 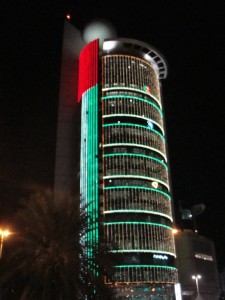 There’s a particularly strong sense of it being party time – with 43 picked out in lights along the roads; huge flags draped over key buildings; artistic decorations of various sorts in the national colours everywhere you look. People are wearing scarves in the colours of the flag and there are National Day cupcakes as well.

The US and Turkey wrap themselves in the flag particularly fervently. India is getting to be that way. The UAE’s flag-waving fervor comes as a bit of a surprise, though, on reflection, I’m not sure why that should be the case.