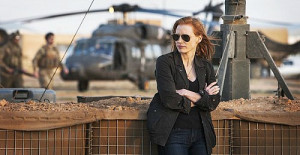 So now we now know (or at least many people now know) the identity of the 49-year-old CIA Al Qaeda expert, who was portrayed in Katherine Bigelow’s disturbing film ‘Zero Dark Thirty’.

Click here to read The Daily Telegraph’s report on the outing of the woman dubbed the ‘Queen of Torture’ following the release of the US Senate report on the CIA’s use of torture tactics after 9/11.

Her career is revealed to feature a series of blunders and accusations of misleading Congress and falsely provided justification that torture worked.

“She gleefully participated in torture sessions afterward; she misinterpreted intelligence in such a way that it sent the CIA on an absurd chase for al-Qaeda sleeper cells in Montana. And then she falsely told congressional overseers that the torture worked,” wrote Jane Mayer in the ‘New Yorker’. Ms Mayer has written a definitive history of the CIA’s “enhanced interrogation” practices, so it’s reasonable to believe most of what she says.

Is it right that the moral stain on America’s defensive practices post-9/11 should be blamed on just one woman?

In the panicky days and months after an event that no one knew how to deal with, the Bush administration acted with callous coolness, the CIA with a determined lack of restraint and Americans closed their eyes to all that was being done to keep them safe. They felt safer knowing that their government and security agencies talked of hunting the last man down, that their president talked like a cowboy and advertised a “dead or alive” tough guy message to Osama bin Laden.

In those days and months (and years), America did what it did. Wilfully.

It’s not just that 49-year-old CIA agent, whether the real person or the sassy Hollywood version. In the film, Jessica Chastain plays the analyst, known as Maya (see photograph above), as a cool, cerebral woman with a tenaciousness that will not be knocked off course by mere procedural detail.There was a storm of protest that it made torture look “good” with Ms Mayer accusing it of “providing false advertising for waterboarding.”

Unless you’re borderline fascist and deeply, troublingly violent, you couldn’t have failed to be repulsed by the torture depicted by ‘Zero dark Thirty’.

And you’d have wondered if Maya felt that with each small victory, she became a little less human.