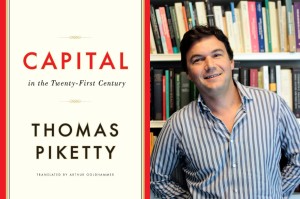 Even though Thomas Piketty said it, the facts don’t support the theory that inheritance has accounted for an increasing share of household wealth and is exacerbating inequality in America.

That’s what NYU economics professor Edward N. Wolff says. He should know. His new book deals with exactly that subject. It is titled ‘Inheriting Wealth in America: Future Boom or Bust?’
He says that Mr Piketty’s book, ‘Capital in the Twenty-First Century’ suggests ever-rising wealth inequality but figures taken from the Federal Reserve Board’s triennial Survey of Consumer Finances from 1989 to 2010 contradict this.

Professor Wolff explains that increased lifespans (and more healthcare costs) and more charitable bequests have made it difficult for people to bequeath money to their children. Charitable donations have become a particularly important feature among the truly wealthy.

So the fat cats aren’t financing trust fund babies in the way some might think.

At least according to Professor Wolff.