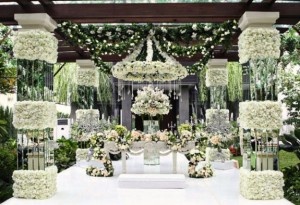 The way people get married is not what it used to be. Wait, this blog is not what you think it is. This is not a musing on serial monogamy – third and fourth weddings – blended families.

This is about literally, the change in the way people now get married.

As Beth Montemurro points out in a fascinating piece for Aeon magazine, “Prior to the mid-20th century…most people could not afford to spend money on extravagant festivities and so married simply, wearing their Sunday best with an afternoon party or dinner at home.”

She says that Queen Victoria created the trend towards white wedding dresses in 1840.

The bigger trend though was the sumptuous weddings but it only became “big business in the latter decades of the 20th and into the 21st century”, says Ms Montemurro. She quotes TheKnot.com survey of 13,000 American brides and grooms –a couple spent approximately $30,000 on their wedding.

This contrasts oddly with the fact that “for most of US history, weddings were private affairs planned by family, with few ritualised conventions”.

As Oscar Wilde said. Marriage can ruin a man – it is as demoralizing as cigarettes and far more expensive.