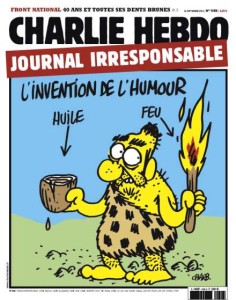 This is a pretty remarkable piece by Jacob Canfield and deserves to be widely read, just as a way of understanding racism and intolerance of all sorts. And then considering the appropriate ways of responding to intolerance.

Intolerance from people with a Muslim worldview

intolerance from the virulently xenophobic mindset sometimes represented in Charlie Hebdo’s cartoons. Remember even the BBC won’t print some of the magazine’s work!

Mr Canfield writes that that while Charlie Hebdo “generously claim to ‘attack everyone equally,’ the cartoons they publish are intentionally anti-Islam, and frequently sexist and homophobic.”

He goes on to say that “these are, by even the most generous assessment, incredibly racist cartoons. Hebdo’s goal is to provoke, and these cartoons make it very clear who the white editorial staff was interested in provoking: France’s incredibly marginalized, often attacked, Muslim immigrant community. Even in a fresh-off-the-press, glowing BBC profile of Charb, Hebdo’s murdered editor, he comes across as a racist asshole.”

Sure, but that doesn’t mean he deserves to be killed does it? As The Washington Post said, “Even if the cartoons are insulting to many Muslims (including the vast majority who don’t support today’s violence), there are far greater injustices and outrages in the Muslim world that surely merit more attention.”

(Tomorrow: It’s important to recognize that some people think Charlie Hebdo was ‘asking for it’)