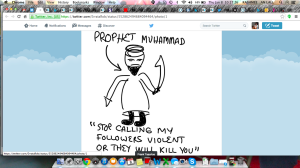 “Stop calling my followers violent, or they will kill you”.

I was reminded of this amateur citizen-cartoonist’s words and offering (see right) from the morning after the Charlie Hebdo attack, when I read about the storm over the magazine’s new cover. (Mashable recorded the drawing from appalled citizen-cartoonist Rob Graham. From his twitter handle @ErrataRob he tweeted, using the hashtag #JesuisCharlie: “If everyone draws a cartoon, cartoonists won’t stand alone, we’ll be too many to kill. Here’s mine.” Read the full Mashable story here.)

Anyway, so back to Charlie Hebdo’s newest offering: A cartoon of the Prophet shedding a tear and holding one of the country’s now-ubiquitous ‘Je Suis Charlie’ signs beneath a headline reading “All Is Forgiven”.

One may debate the rights and wrongs of the cover. One may wonder why the magazine wanted to dare extremist loonies yet again. One may wonder if the magazine’s surviving staff lacked the spirit of self-preservation. One may ask if they were right to take freedom of speech as an obligation to offend.

But why would Dar al-Ifta, Egypt’s highest authority for religious edicts, issue a statement calling the cartoon “unjustifiably provocative to the feelings of a billion and a half Muslims worldwide who love and respect the Prophet”?

What does “unjustifiably provocative” mean?

Draw this and someone will kill you?

We’re all so hurt, someone will have to hurt you?

A gun cannot stop a human being from thinking what he thinks – as dictators and strongmen know.

Instead, someone very rich (and possibly Muslim) could launch a devious, shadowy operation to take over (and close, or muzzle or whatever) Charle Hebdo.

Or just don’t read it. Sales were very low before the attack anyway and the magazine was struggling to survive.