Our notes to tomorrow’s world: the 10,000-year clock & Rosetta Disk 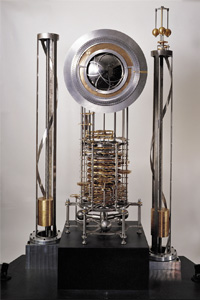 It should be reassuring that there are a lot of very clever people considering a surefire way to communicate with future residents of this planet.

In a piece for Aeon, Grayson Clary describes the endeavours of the Long Now Foundation in San Francisco. Apparently, it was set up 18 years ago to build a culture of extremely long-term thinking. So much so that its house style is to write 2014 as 02014. This, in order “to solve the Y10K problem, and to leave room for millennia 11 through 100,” writes Mr Clary.

Now, they’re trying to scatter artefacts around the world, for successive civilisations to find.

One of these is the 10,000-Year Clock. It’s in a Texas mountain, meant to run for millennia and its message is described as follows by the Long Foundation’s board member Kevin Kelly: “[As] long as the Clock ticks, it keeps asking us, in whispers of buried bells, ‘Are we being good ancestors’?”

You’ve got to keep in mind that tomorrow’s world may wonder if the timepiece was one of our gods.

And what would it make of the Rosetta Disk, an archive of 1,500 human languages in 13,000 pages, sheltered in a glass globe, one copy of which is ensconced on Rosetta, the European Space Agency’s comet probe?

For the moment, a clock and the written word seem the best bet to transmit to the future. Stay tuned.