3-person babies & the need to rethink eugenics. Not about playing god 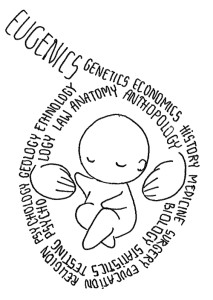 Now that MPs are to vote on whether Britain should become the first country in the world to permit strictly controlled clinical trials of “three-parent” babies“, it’s time to re-consider eugenics. No one would ever blame their parents for giving them a strong set of genes. So why not do so?” asks OZY. It’s a compelling question and I’m not sure most people will be able – or willing – to answer honestly.

We think of eugenics as a dreadful concept that ends in birth labs, DNA sequencing-by-numbers, forced sterilization of undesirables, and taking the love out of making babies.

But it’s not really always that way is it? As the OZY piece points out eugenics is already socially accepted in some way – hybrid crops, egg-freezing, sperm donor-selection and testing mature pregnant women to make sure the foetus doesn’t have Down syndrome. In fact, 92 percent of fetuses that test positive for Down syndrome in the US are never born.

That said, “better genes” is a subjective concept. It you want your baby to be as smart and as healthy as possible, will you also want to start choosing its colouring and shape of the eyes?

Will you want to play god via the petri dish?