It’s official. Nations really do go to war over oil and here’s the evidence 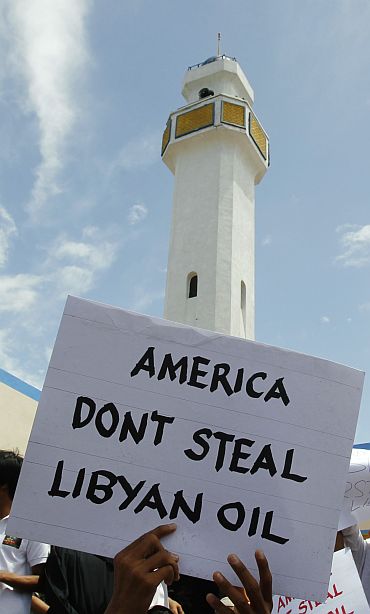 Academics in Britain have been taking a long hard look at the world’s propensity to intervene militarily in, say, Libya and failure to do so in Syria and in Rwanda.

“No world leader stands before the UN and says they’re sending in the tanks because their country needs more oil,” acknowledge Vincenzo Bove and Petros Sekeris in The Washington Post.

But when they researched the importance of oil production in attracting third party military interventions, they found that the trigger factor really was oil. They took 69 countries, which had a civil war between 1945 and 1999. About two-thirds of those civil wars saw third party intervention either by another country or outside organization. They’ve written a paper with their findings, along with Kristian Gleditsch in the Journal of Conflict Resolution.

“We found that the decision to interfere was dominated by the interveners’ need for oil – over and above historical, geographical or ethnic ties,” say Mr Bove and Mr Sekeris.

“Military intervention is expensive and risky. No country joins another country’s civil war without balancing the cost against their own strategic interests and what possible benefits there are.”

Most of the interventions were meant “to preserve oil prices on international markets,” they write and on average, there were “more interventions in periods when there were only a few big oil producing countries and thus reduced competition (and more stable prices).”

They point to US interventions, the USSR’s 1958 intervention in oil-rich Indonesia, when Soviet oil production was still in its infancy, the UK’s military intervention in the Biafran War. The Nigerian civil war lasted from 1967 to 1970, a time when the UK was one of the largest net oil importers in the world and had yet to produce North Sea oil production (that only started in 1975). Notably though, “the UK did not intervene in civil wars in other, less oil-rich  former colonies such as Sierra Leone or Rhodesia (later Zimbabwe)”, says the paper.

Countries with oil – and muscle – didn’t intervene much, it says, except for that almost unique situation in which Saudi Arabia provided military assistance to royalists during the 1960s civil war. (One has to wonder how later researchers will read more recent muscularity in Saudi Arabia’s approach to Yemen and the Gulf region?)

So what’s in prospect for interventionism in this century? We’ll discuss this tomorrow.