Kim Jong Un’s new haircut is an up-do so does that mean things are improving? 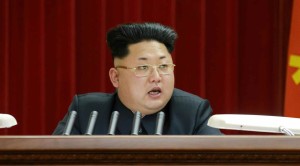 The top is “sculpted into a high, wedge-shaped pompadour that sits atop Kim’s head like a hat”.

The story asks a number of jokey questions about what the new haircut might mean:

“Does his haircut sail majestically ever-upwards, unlike the North Korean Unha rocket that failed spectacularly after launch in 2012, breaking up over the Sea of Japan?

“Will the haircut affect the possible resumption of the six-party talks on the future of North Korea’s nuclear weapons program?

“Given the haircut’s obvious strength, would it be prudent to consider it a potential party to the talks in its own right?”

But New York mag offered the cleverest interpretation of the haircut: “Kim Jong Un is getting really into Fashion Week. Feeling inspired by feats of runway hairstylists, he showed off a new do”.