What should we make of Netanyahu’s judgement? Or lack of? 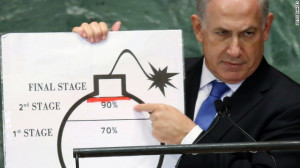 Less than a week before Binyamin Netanyahu’s controversial  speech to the US Congress,  what should we make of the Israeli prime minister’s judgement?

More to the point, what is Israel making of his judgement? Of his decision to visit DC next week at the invitation of the Republican speaker John Boehner and really sock it to the Obama administration, in the US Congress, for daring to negotiate a nuclear deal with Iran?

Well, Haartez is not cheering the cynical callousness with which Mr Netanyahu has put his own political survival (the elections are on March 17) over and above Israel’s security.

In an acerbic analysis headlined “Beyond chutzpah: Here’s how Netanyahu could have handled the Iran nuclear talks”, Amir Oren is very unimpressed by Mr Netanyahu’s self-serving behaviour.

“If Netanyahu’s moves were really guided by fear for Israel’s security rather than for his own political survival, he would not have opted for confrontation with Obama and an alliance with the president’s Republican rivals,” he writes. Instead, the prime minister would have focussed on getting the Americans to insist on Israel-related points of agreement with Tehran. For instance, “an official Iranian disavowal of its dream of destroying Israel”.

Mr Oren also suggests that Mr Netanyahu could have further extracted a promise from Mr Obama that “Washington would consent to an Israeli attack on Iran if both countries’ intelligence agencies concur that the Iranians have violated the agreement”.

A bit hardline that, but at least it is in Israel’s interest. It also has weight, coming from Haartez, Israel’s oldest daily newspaper and a respected paper of record.

In any case, it was always clear that it would not help Israel for its prime minister to reduce his country’s relationship to that between his Likud Party and the US Republican Party. The US has always been firmly bipartisan in its support for Israel. To cut at that is foolish and unwise.