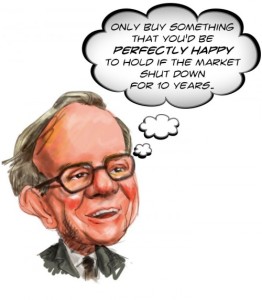 If all goes well, Warren Buffett will put out an especially long annual letter today. It will be some 20,000 words and will mark 50 years of running Berkshire Hathaway Inc.

This is a real royal golden jubilee – Mr Buffett is nothing if not the king of investing and business (and perhaps equally crucially, with the crowning glory of bearing much honest goodwill towards the world).

According to Bloomberg, the letter is usually closer to 14,000 words, has long been a must-read on Wall Street and is full of homespun wisdom about investing. That’s hardly surprising considering Berkshire was a struggling textile manufacturer when Mr Buffett took over and is now one of the world’s largest businesses with shares that trade for more than $200,000 apiece. The company’s market value is about $367 billion, it has a stock portfolio of more than $100 billion and it operates in fields as diverse as insurance, railroads and electric utilities.

At 84,Mr Buffet would be a bit disingenuous if he made no mention of a time when he will no longer be around.

He has, as Bloomberg says, “deflected questions for years” but if he finally shed some light on the issue, it would be pretty momentous.

Another issue that would interest the world is Mr Buffett’s almost fanatical dedication to delegation. He has, in the past, said that he hands off responsibility “almost to the point of abdication.” Berkshire’s headquarters famously have no more than two dozen workers, while the company’s subsidiaries collectively employ more than 300,000 people.The business world is likely to want to know the changes, if any, that Mr Buffett sees coming in his company.

Last, but not least, there has long been great fascination with Mr Buffett’s general philosophy of buying companies for keeps as long as labour relations are good and the management reliable. But of late, there have been a few subsidiaries that aren’t doing too well and may be beyond help, so any pointers on how to deal with change are bound to be of interest.