The end of ‘the quick brown fox’ and other typing exercises? 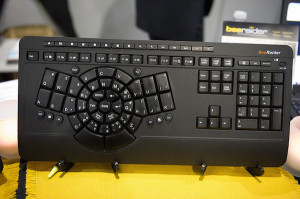 I first read about the new keyboard – efficient in a way that the 1878-patented typewriter-inspired one was not – in OZY. The piece described Ray McEnaney’s  frustration at “ the traditional QWERTY layout” and his determination to work out a new universal key arrangement.

Mr McEnaney spent a decade working on his project. And he’s come up with something quite extraordinary: a keyboard that resembles a flying bee.

Unsurprisingly, it’s called BeeRaider and has two wings of keys, one on each side of a radial center. The keys that are needed the most are at the center and Q, K and X are placed farther away.

The new keyboard obviously calls for typists to learn it. Its inventor says it takes 20 minutes flat and a bit of practice of the following phrases:

The OZY writer reported finding it “a little weird to type in such a fashion” but that it felt surprisingly “natural” after five minutes…”my fingers somehow finding the letters they needed.” She added, “Having the alpha characters — the keys used most often — grouped together really helped memory retention as well.”

That’s some endorsement and though no can be sure sure if it’s curtains for “the quick brown fox jumps right over the lazy cow”, if the BeeRaider takes off, it will be a new era of “I hate waster excess”.