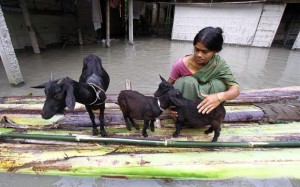 Sunday is International Women’s Day but the annual ritual of high-minded promises and hand-wringing will be different this year because of a dispiriting new real-life disaster movie, India’s Daughter. It injects a powerful local flavour into the increasingly bland, homogenised global debate about violence against women. But many Indians fear it shows them as a nation of neanderthals.

The snowballing controversy only underlines the contradictions within Indian society and does nothing for the cause of women. British filmmaker Leslee Udwin spent two years in India making the documentary. She examined the cultural context of the gang-rape of a 23-year-old woman on a moving bus in Delhi in December 2012, the corrosive anger that erupted across India after her death from her injuries and the subsequent international scrutiny of India’s attitude to women. The film is to be broadcast in the UK on Sunday and was to be simultaneously shown in seven other countries including India. But the Indian authorities want to block its broadcast at home and abroad on account of the rapists’ recorded remarks.

The kerfuffle makes it difficult to predict if the planned high-profile New York screening of India’s Daughter will go ahead on Monday. But it was meant to be the centrepiece of a worldwide campaign against gender inequality and sexual violence, to be launched by Meryl Streep and Indian actress Freida Pinto (leading lady of the film Slumdog Millionaire).

It may be just as well if this documentary on India’s conflicted reality is not elevated into a global template. It cannot carry such broad-focus concerns.

Rewind to Beijing in 1995, when 189 governments adopted a blueprint for women’s rights, whittled down to 12 “critical areas of concern”. It was organised by the UN’s Commission on the Status of Women. That was when Hillary Clinton, as US first lady, received hosannas for taking the stage in a pink jacket and declaring that “human rights are women’s rights and women’s rights are human rights”. She might more usefully have added the words “in the local context”. Rights are about global principles of natural justice; their enforcement – or not – is always local.

The “status of women”, in UN-speak, cannot be shoehorned into a homogenous set of global statistics. The local context is crucial. As Udwin tells it, her film lays bare the aggressive misogyny of the rapists she interviewed in India. In 16 hours of interviews, Mukesh, one of the five men who raped the 23-year-old woman, tells the film-maker that had the girl passively put up with the assault, she might have stayed alive.

He also expresses a view that is echoed (and often tragically acted upon) by many men across South Asia and was recently expressed by the great and the good in the Turkish government: that a woman’s place is the home and only the promiscuous are abroad at night.

While regrettable, Mukesh’s opinions are hardly a surprise, but India’s Daughter is still not the world’s story.

The situation is subtly distinct, say, in Ethiopia, where women suffer an equally ignominious social position, yet rape is a cultural practice often used as a way of taking a girl as wife. (For the record, rapists in South Asia rarely stoop to wanting to marry their victims.)

And then there is Sweden, which has one of the highest rates of rape complaints in the world. But that’s because its police procedures and legal definitions are very different, and a woman reporting sexual assault, say by her husband, receives due attention in that every incident is recorded separately. This swells the overall numbers.

That said, there is a common thread that runs through incidents of sexual violence wherever and whenever they occur. It is always about power. And women, as that intergovernmental Commission on the Status of Women says, still don’t have their fair share anywhere. It released the following figures at the end of February: only one in five parliamentarians worldwide is a woman; approximately 50 per cent of women are in paid employment but wage inequality is so gross it will take 81 years, at the current rate of progress, to achieve parity.

But here’s the problem with aspiring to statistical equivalence and ticking boxes: women’s rights become a ring-fenced preserve of female commentary and action, run by a frightening global mafia spouting a slick sisterspeak that takes no note of disparities across and even within cultures, countries and classes.

Economist Ruth Pearson points out the contradictions in, say, paid employment for women worldwide: “As individual workers they experienced both the liberating or the ‘empowering’ impact of earning a regular wage, and of having increased autonomy over their economic lives; at the same time many were also well aware of the fact that their work was low paid, both in comparison with male workers but also with women workers employed in industrialised countries.”

Globalisation, then, is only half-good for women’s rights. As Gayatri Chakravorty Spivak, the only woman of colour to be honoured with a professorship in Columbia University’s 264-year-history, said of Beijing and other such world jamborees, they project “a global radical aura” and they turn “woman into global theatre”. That is reductive – for the cause and for results. If the spirit of Mrs Clinton’s famous Beijing 1995 declaration is to inform the agenda, women’s rights really must be seen as indivisible from human rights, and any crime against a woman as a crime against us all. Complete with local nuances.