Can this really be true? That French will be lingua franca by 2050 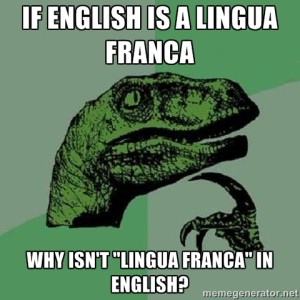 French is set to become it becomes the world’s most commonly spoken language by the year 2050, reports OZY, quoting a study by Natixis, an investment bank.

By then, it will be spoken by 750 million up from 220 million that puts it in sixth place today.

Apparently, this is less to do with growing popularity – and a growing business or economic profile – but because French-speaking populations are having more babies.

Most French-speaking countries – 31 countries, not counting France – have high fertility rates. The populations of Mali, Guinea, Chad, the Democratic Republic of Congo, to name just four, are growing very fast.

So far, so good. But contrarians – or just the curious – might wonder about this.

First, Natixis would say that wouldn’t it? It’s is a French corporate and investment bank created by the merger of the asset management and investment banking operations of Banque Populaire group and IXIS (Groupe Caisse d’Epargne).

Second, the study makes the mistake of seeing every state that has French as the official language as a French-speaking country. Which it is, but only up to a point (Belgium, for example, has more than one official language). Then, there is the brute fact – that former colonies like Tunisia are speaking more Arabic than French. This doesn’t sound particularly encouraging for the growth curve of French as the language that will beat English.