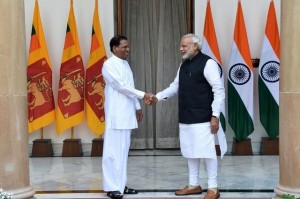 The most obvious extrapolation from Indian prime minister Narendra Modi’s ongoing voyage through the Seychelles, Mauritius and Sri Lanka in the Indian Ocean is that like seafaring conquerors of yore, he wants to symbolically make landfall at a strategic point and plant his country’s flag. Though travelling by air, he is seeking to reclaim India’s maritime neighbourhood from China. So this is an “Oceans Three” odyssey, which is meant to recast the Indian Ocean as “India’s Ocean”, an area where the political tides turn in synch with the mood in New Delhi.

Mr Modi is seeking to win over the three islands with charm – and with offers of military and civilian assistance. A 500-megawatt thermal power plant is proposed for Sri Lanka. Mauritius will get India’s first ever export warship, one of 13 it plans to supply. The Seychelles has received help with radar and renewable energy, among other goodies.

Unfortunately, the gifts and blandishments come rather late. The charm offensive cannot undo more than a decade of China’s canny yuan diplomacy and development of seaports in South and Southeast Asia.

That said, the Indian Ocean region is eminently suitable for India to practice its long-overdue neighbours-first foreign policy. Mr Modi created the focus after his election in May and traditionally, that would have meant just Pakistan, Bangladesh, Nepal, Bhutan and Sri Lanka. The addition of Mauritius and the Seychelles (and the Maldives, too, had its own domestic politics not been a concern for Delhi right now) suggests that neighbours-first is pragmatic, mercantile and much broader.

It is meant to search out and capitalise on Indian “characteristics”. It is sui generis, of its own kind. In a region with a mixed ethnic and religious history, it seeks to play on shared, often deeply buried cultural roots and values. Sometimes, these are no more than mythological. This is insular enough to appeal to island communities, hemmed in by the sea and traditionally considered more prone to cling to their notions of identity. But it is just outward-looking enough to suggest that it might be the future.

Consider Mr Modi’s agenda in Mauritius. He will commission the 1,300-tonne Barracuda warship, a symbol of progress and cooperation.

As chief guest at the national day of the Hindu-majority island, he will be in the company of prime minister Anerood Jugnauth, whose very name speaks of his Indian ethnicity despite the distorted spelling.

Technically, Mauritius should always have been a dead cert for India’s sphere of influence. It has had observer status at the South Asian Association for Regional Cooperation for a few years, but from the turn of the millennium, it is Chinese money that has been flowing into projects big and small: an international airport terminal, theatre-renovation and crucially, the $1 billion Jinfei Economic and Trade Cooperation Zone.

That was an enormous investment in an island with no natural resources to extract, no cheap labour and no significant domestic market. But just a thousand miles off the coast of Africa, Mauritius is a gateway between Asia and Africa and a secure Chinese foothold there has a spoiler effect on India’s assumption that it dominates the region.

So, too, the Chinese presence in Sri Lanka, historically known as the pearl of the Indian Ocean. Mr Modi’s arrival marks the first bilateral visit in 28 years by an Indian prime minister. There are deep ethnic and cultural links between the two countries – even an unlettered Indian villager knows “Lanka” from the Hindu epic, the Ramayana. India is Sri Lanka’s largest trading partner but has let the relationship fray. China has picked up the slack and for nearly a decade, Sri Lanka has been a key element in its “string of pearls” strategy of investment in ports along the Indian Ocean littoral.

Pakistan’s deep sea Gwadar port was the first of those. Then China paid for much of the first phase of Sri Lanka’s Hambantota port.

The modernisation of Bangladesh’s deep-sea port in Chittagong was next. And Kyaukphyu port in Myanmar is thought to be further along the pearl strand. Significantly, in the run-up to Mr Modi’s visit, Sri Lanka’s new government seemed unlikely to reject a further $1.5 billion Chinese investment in a port project in Colombo despite Indian concerns.

The point about the string of pearls is that it reflects Beijing’s commitment to the security of its oil and gas imports from the Middle East and Africa as they transit through the Indian Ocean and the Strait of Malacca. Former Chinese president Hu Jintao, who has publicly spoken of the “Malacca dilemma”, visited both the Seychelles and Mauritius twice. His successor, Xi Jinping, has been to the Maldives and Sri Lanka.

The worry, for those who know naval history, is that China may militarise the string of ports. Two hundred years ago, Alfred Thayer Mahan, who is considered one of the world’s most influential strategists on sea power, linked maritime commerce, a country’s wealth and its dominance of the oceans in a tight web. There could not be one without the other, he argued, and naval force might be needed.

This is what preoccupies analysts in Delhi and DC. Defence analysts are pointing to the ongoing series of leaks about China building an aircraft carrier – it would be its second – a sophisticated US-style ship with a modern catapult to launch craft. There is some suggestion that its goal is to build six.

As has often been said, China is working to the tried and tested model of a great power: great powers have great navies. Unfortunately, that often means great ambitions as well. These would inevitably conflict with India’s.