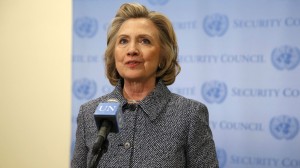 I’m with Annalisa Merelli @missanabeem of Quartz. Hillary Clinton shouldn’t have ducked out of answering a question about gender and scrutiny in relation to her email practices as secretary of state. By doing so she makes the very real concerns of women’s rights a suspect cause.

Here’s what Ms Merelli wrote: “Clinton was asked whether she thought a man in her position would be held up to the same scrutiny. She declined to reply, saying she’d leave the judgment of the situation to others—which is a shame, because indeed a man would have been grilled just as she has, and she should have been proud to say that. Clinton was under fire not for her gender, but for her power and success, and for her conduct while holding the most important foreign affairs office in the world. She should have acknowledged that her treatment was not due to gender imbalance—if anything, it was a sign that she was taken as seriously (and as suspiciously) as a man.”

This can sometimes be the problem with women and especially with women who are vocal about gender equality. It seems easier to lump every question, every slight, every negative comment into the gender box rather than face up to the fact that a mistake is a mistake – whatever your gender.