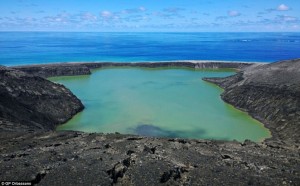 The first photographs of a newly formed island in the Pacific Ocean, off the coast of Tonga, reminded me of the magic of islands.

Those of us who did not live on an island, set sail for them through Enid Blyton’s Adventurous Four. When Tom, Jill and Mary and their raggedy fishing friend Andy went off and lived on a hidden island, it was exciting. Then, an island seemed a magical place.

As Libby Robin, a professor at the Fenner School of Environment and Society at the Australian National University in Canberra, wrote in Aeon, an island is as much metaphor as it is physical place.

Professor Robin is well qualified to speak. She lives on a large island, Australia. It is, she says, so large “that it is continental in behaviour.” She goes on to discuss island-mindedness, which “is born in island places” and the more attractive concept of “islands of the mind”.

But what of islands that are born in our lifetime? The new, unnamed one near Tonga may not live long, but it is exciting to know all about some place – from its origins, to the way it gets overrun with seabirds laying eggs, and the sulphurous smell of the green lake in its crater. One might fancifully imagine it almost to be like the virgin earth, at the dawn of time.