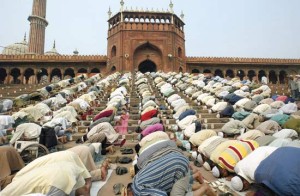 Is the West Ready for More Muslims? asks Christopher Flavelle  on Bloomberg View.  He quotes a new Pew Research Centre study’s numbers: by 2050, Muslims worldwide will have grown by 70 per cent, adding more co-religionists than any other faith. It will then equal the number of Christians. And 1 in 10 people in France, Germany, Italy and the UK will be Muslim.

Pew apparently used age distribution, fertility and mortality rates, and patterns of migration and conversion of all religious groups to arrive at these numbers. It estimates the religious break-up as follows by 2050:

30 per cent of the global population will be Muslim

Back then to Mr Flavelle’s question.