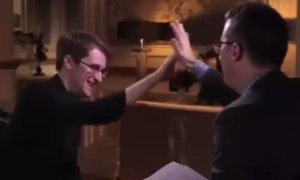 It’s official, yet again. Comedians are the real world’s real journalists. They’re the only ones the great American public, at any rate, will believe.

I say this advisedly, off the back of HBO comedian John Oliver’s Sunday night in-depth interview in Russia with Edward Snowden.

Nearly two years after Mr Snowden made public a trove of documents about the American government’s mass surveillance programmes, Mr Oliver flew to Russia and managed a half-jokey supremely serious conversation with him.

Quartz reports that the interview focused on “one specific possibility: Can the government secretly access Americans’ naked selfies?”

To which Mr Snowden, looking much thinner than when he started on his whistleblowing journey and with a shorter haircut, answered “yes”.

I watched a minute-and-a-bit long video excerpt and the conversation seemed to have veered away (or perhaps not got to) naked selfies.

Instead, Mr Oliver asked why one wouldn’t want spies to be good at what they do?

To which Mr Snowden replied that they should be, just not within the country whose people they’re supposed to be protecting through their habit of eavesdropping. Then they become dangerous, Mr Snowden said.

They can look at all those naked selfies, presumably, and assess all those missed gym sessions perhaps.