Will Indians in the Gulf inevitably lose ground? 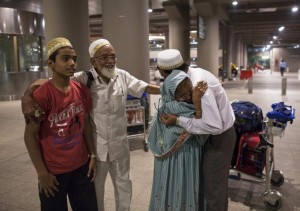 The Indian and Chinese operations to evacuate their respective citizens from Yemen illustrate both countries’ very different equation with – and footprint in – the Gulf region. India continues to evacuate its citizens. By Tuesday, just half of the estimated 4,000 were out. Many of the rest are described as loathe to leave. But China quickly extracted its small number – barely 600 – of workers within days of the start of the Gulf coalition’s air campaign against the Houthi rebels. It was a surgical operation and there seemed to be no signs of lingering regret among the departing Chinese.

This is less to do with Chinese people’s stereotypical inscrutability and Indians’ supposed emotionalism than with straightforward economics and a bit of history.

The Indians are passionate for practical reasons. Those lingerers in Yemen know that they have few prospects at home and are willing to sit out the fighting and instability. If they leave, they fear they may never be able to return and the venture will have proved unsustainably costly in terms of unpaid loans taken out for that life-changing golden passage to the Gulf.

For the Chinese, whose typical profile in the Gulf region is either in a Chinese business or in a full-service (management and labour) Chinese construction company, if there is any return, it will be managed at the appropriate time and in the appropriate way. The Gulf is important to China as a source of oil, an export market for cheap wares, geopolitical strategising, inward investment, construction contracts, and latterly, even as a tourist destination for high net worth travellers. But this region is not the fulcrum of the hopes and dreams of the Chinese, as it has been for Indians, particularly the lower echelons of society, for nearly half a century.

Gulf Indian workers are at their highest number today. As the widespread availability of Indian products – Mysore sandal soap, Amla hair oil – shows, at 6 million, they are the largest ethnic group in the six GGC countries’ 20 million migrant worker population. There has been large scale Indian migration to the Gulf in the last 40 years starting with 40,000 in the 1970s.

But Indian engagement with the Gulf extends much further back in time. In 1882, the Consul-General of Baghdad was informing the secretary, foreign department of the government of India that 3,000 Indians permanently resided “in Mesopotamia”. In 1910, Abdul Ali, a prosperous Indian merchant who ran an ice factory in Baghdad, became famous for his public musings on the virtues of renouncing British nationality for Turkish because of the continuing property dispute between British and Ottoman officials. And in 1916, when Cursetjee Manockjee Cursetjee, retired judge of the Bombay High Court, sailed up the Gulf and called at numerous ports upstream, he marvelled at “the use of Hindustani, India’s lingua franca. [It] has already to a small extent found its way in the bazaars on the Gulf shores, where many petty Indian traders have gone and settled. If trade follows the flag, language follows trade and this fact will now be largely developed by the immense influx into middle-Asia of Indians whether as soldiers, civilians, camp followers and office-dependents”.

The current picture is somewhat similar, though marginally less colourful. The Gulf Indians are now the second largest overseas Indian community in any geographical region (south east Asia has the largest) and account for more than one-third of the annual $69 billion remittances by Indian expatriates to India. As American anthropologist Andrew Gardner wrote in City of Strangers, a carefully observed account of Gulf migration: “Behind the migrant workers are spouses, children, parents, siblings and debt. In boarding a plane to the Gulf, they gaze to an uncertain horizon where goals like marriage and its incumbent costs, the construction of a home, the purchase of agricultural land, or the accumulation of capital to start a small business in India will, someday, perhaps be within grasp. Their tenure in the Gulf is short, or at least it begins with the idea of a few two-year contracts followed by a return home to build upon the savings collected during their time abroad.”

But prospects in the region are becoming more fluid and changing, so much so that the passions awakened in Indian breasts during the Yemen evacuation may seem outdated within a mere half-century.

There are two reasons for this: Arabisation policies and concerted attempts by Indians to push for higher wages for its workers. At some point soon, the GGC countries, especially Saudi Arabia and the UAE, which employ the most Indians, will want only the irreplaceable ones. This will mean two different sorts of worker: highly-skilled white collar and blue-collar ones banded together in Indian companies that imitate those full-service Chinese entities, which is to say recruiting, bringing in and managing teams for specific jobs and removing them as needed.

That’s very distinct from sourcing individual labourers from India, as now, but it also mitigates the possibility of trouble in the way of the lower-cost Nepalese who have been particularly vocal about migrant worker rights.

The Gulf Indian worker’s profile has already changed in the past 25 years. It has gone from 90 per cent unskilled blue-collar to 35 per cent white-collar workers.

As it evolves further, the implications will be profound. White-collar Indian workers will have more options and will be less reluctant to leave, say, a war zone like Yemen. And the banded blue-collar ones will be extracted clinically, just as happened with the Chinese from Sanaa and Aden. Either way, that passionately practical Indian engagement with the Gulf will be immeasurably altered.