The rich world cannot live in an anti-migrant fortress 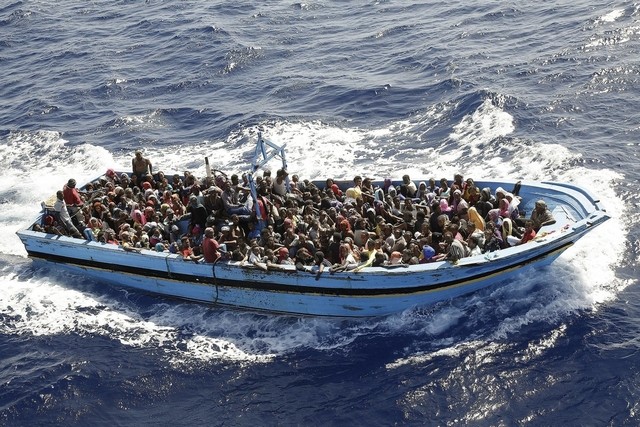 Unless the world is remade as a far fairer place, there is no real way to solve the grim problem posed by the hundreds who die in the Mediterranean Sea on their way to Europe from some benighted reality somewhere – Libya, Syria, Iraq, Mali, Senegal, Somalia, Bangladesh. No real way, that is, to solve it to everyone’s satisfaction.

No matter the result of today’s EU heads of government talks, war and want will continue to send shoals of the uninvited – refugees and economic migrants – to the fantasy shores of the rich world. Europe, Australia and North America will continue to resent being made to feel responsible for all the wretched of the earth. The Catholic Pope will preach compassion. Demagogues of disparate stripe will deal in much noise and heat – migrants are a costly nuisance, a burden on finite space and resources, a threat to security and cultural cohesion and one’s daughters besides.

In conscience though, the matter has to be dealt with. Europe’s migrant crisis is worsening at an alarming rate: the International Organisation for Migration (IOM) estimates that nearly five times as many people died in the Mediterranean last year than in 2013.

In less than four months this year, the toll is 954 and that was before Sunday’s latest calamity at sea. For the Mediterranean to become “a cemetery”, in the bleak words of Italian prime minister Matteo Renzi, is bad for Europe’s sense of self-worth, let alone its image, its branding and its boast that it is a civilised force for good.

There are two ways to address elements of the problem.

First, restore refugees’ rights. Both the rich world and peaceful if poor countries need to recommit to the practical aspects of asylum-seekers’ right to seek refuge.

This should be a given, certainly for the desperate flows out of imploding countries such as Syria, Libya, Iraq and Yemen, where there is enough of an international consensus that conflict or civil war is under way. The right has existed since 1951 in the United Nations Convention and Protocol Relating to the Status of Refugees. The only real change it ever formally underwent was a broadening of scope in 1967 – refugees were no longer limited to persons fleeing events occurring within Europe before January 1, 1951 – but the convention has been severely restricted in practice since the 1980s.

That was when rich countries started to require a visa from people wishing to travel from places that were likely to generate asylum seekers. Subsequently, airlines were required to screen potential asylum-seekers before they left their home country or else face “carrier liability”.

In theory, the convention distinguishes refugees from other migrants if they are able to demonstrate “a well-founded fear of being persecuted”. In practice, asylum seekers have become just another sort of unwanted migrant, people who must be turned away.

The growing reluctance to take in refugees is reflected in the UN’s resettlement figures over a 30-year period from the 1970s. At the time, the UN High Commissioner for Refugees was resettling nearly a quarter of a million people a year. By the countdown to the millennium, it was fewer than 30,000. European Union member states now typically allow low refugee resettlement – just 7,525 in 2014 – although Germany granted humanitarian admission to a further 10,000 Syrians.

On Tuesday, EU ministers seemed to incline to a pilot programme of voluntary intakes. That is hardly enough, but there is a second strand of redress: providing legal, if limited, access for economic migration, in the form perhaps of guest worker programmes with set quotas.

The principle of redistributive justice requires nothing less, both from wealthy countries and those like China, India and Brazil that have got to middle-income status. In this respect, Brazil adopted a bold, rather unconventional response to the flow from dirt-poor Haiti after the devastating earthquake of January 2010. Recognising the inevitable – Haitians’ propensity to “chache lavi” or seek a better life – it started to issue “humanitarian visas” in Port-au-Prince, the Haitian capital.

This was done in the hope that Haitian migrants would not put themselves in the hands of so-called “coyotes”, people smugglers who charge prohibitively to take them via a perilous jungle route into the Amazon and across the border into Brazil.

Obviously, economic opportunity can never be made to stretch far enough to cover the millions who want to leave hellholes. No one has the answer to the broader issue – how to reconcile inequality of opportunity with the worldwide levelling of aspiration.

Even the liberal British journalist Jeremy Harding, who has written two impeccably reported books on the tide of humanity rolling northward to the rich world, had no stronger antidote than “rethinking the economic relationship between richer and poorer countries” and recasting migrants as economic “ferrymen” between the two worlds.

If that sounds far-fetched, so is the notion that the rich world’s anti-migrant fortress will hold up and hold fast. From Monday, a photograph of world leaders at the Charlie Hebdo march in Paris, digitally altered to show them floating in a rubber dingy on the Mediterranean, has gone viral. It bears the hashtag JeSuisBootvluchtelingen, a French-Dutch mix that roughly translates to “I am the boat people”.

The European fortress is already besieged by those harrowing images of drowning people. In death, they have entered the collective consciousness.