Lessons Nepal can learn from its tragic twin Haiti 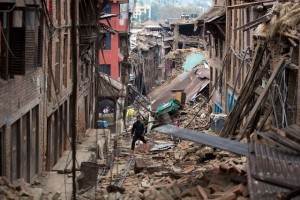 Nepal faces a Himalayan task: it must overcome the aftershocks of history just as much as the effects of Saturday’s calamitous earthquake. As with Haiti, also a historically impoverished, poorly governed country hit by a devastating quake, Nepal may find it a struggle to “build back better”. Bill Clinton crafted the memorable slogan after the “goudo goudo” – the onomatopoeic Creole name the Haitians gave the 2010 quake in memory of its frightening rumble. Now, Mr Clinton’s phrase is used wryly, if not in outright jest.

Unsurprisingly, development do-gooders are cautious about suggesting Nepal build back better, even at this point, four days after the quake, when the world feels its pain most acutely.

For, the slow, ineffective – in some cases, even impossible –search for survivors in Nepal’s remote, hardest-hit western regions illustrates the massive fault lines of its entrenched problems: acute poverty, political dysfunction, rampant corruption and a deep fatalism that inhibits planning.

Those infuriatingly inaccessible western districts were the ones that suffered such prolonged government neglect that the violent Maoist insurgency first took root there nearly 20 years ago. And it says a great deal that those areas still remain so cut off from Kathmandu that earthquake relief packages cannot reach them, and there seems to be no way to assess deaths and damage. The Maoists, supposedly the party of the poor, have been elected – and rejected. The monarchy has been swept away. Nothing has changed and nothing works. For Nepal, its worst earthquake in 80 years has been “an acute-on-chronic event”, to quote Harvard doctor and Haiti champion Paul Farmer on the Haitian catastrophe.

The two countries make for a tragic twinning. Until this earthquake, perhaps the only time the words “Haiti” and “Nepal” appeared in one sentence was in reference to the cholera epidemic unwittingly introduced by Nepalese United Nations peacekeepers stationed in Haiti. It seemed an excessively cruel twist to a pathetic story – dirt-poor Haiti, levelled by a devastating earthquake and infected by soldiers from an equally poor faraway land. But now, the two earthquakes – five years apart – may have created discouraging ly new parallel lines of protracted woe.

The Nepalese quake was 16 times stronger than that in Haiti. More than 200,000 people died in Haiti; what will be the final toll in Nepal? The world gave tens of millions of dollars to Haiti in the biggest-ever outpouring of humanitarian relief ever but the country is little better than it was before the disaster. Is there any point in paying out to rebuild an equally fragile country like Nepal? Five frustrating years of helping Haiti get on its feet will undeniably tinge the world’s generosity towards Nepal with cynicism.

But if Haiti is a cautionary tale, it could also be a template for what not to do.

First, it would be reductive to bypass Nepalese institutions, however inept, corrupt and obstructive they seem. As Dr Farmer lamented in his book, Haiti After the Earthquake: “It’s hard to imagine public health without a public sector, and the same could be said for public education and public works.” Yet, in Haiti, less than 10 per cent of spending for relief and recovery went through government agencies and reconstruction projects favoured western contractors, middlemen and so-called “trauma vultures”. This further weakened the country’s institutions and failed, in development jargon, “to build capacity”.

Second, nimble non-governmental organisations work best. They should be registered with the local authorities or a designated disaster relief coordinator to minimise overlap of effort and the tendency to create a self-governing republic of NGOs, as happened in Haiti.

Third, possibly most important, is to speedily engage Nepal’s people in vast public works projects that provide jobs, money and a sense of being stakeholders in rebuilding their country. Shovel-ready projects – from removing rubble to building schools – can bridge the gap between short-term relief and the long-term hard slog of reconstruction. More to the point, “workfarism”, as it is called, mitigates aid dependency.

Finally, the hardest part: priming the Nepalese mindset towards contingency planning. This would mean understanding the perils of Nepal’s quake-prone geography and developing and enforcing strict building codes. Chile built up resilience after an enormous earthquake half a century ago. The result was a startling disparity between the toll of Chile’s 8.8-magnitude quake in February 2010 and Haiti’s 7.0-magnitude goudo goudo a month before. Just 525 Chileans died.

But Haiti has not fully absorbed this lesson even now and many of its people still live by a popular proverb that signifies God-given resistance: “mikwòb pa touye ayisyen” or “germs don’t kill Haitians”. In other words, hygiene won’t change outcomes; nothing can.

Fatalism can be a debilitating and stubborn condition and it is chronic in Nepal. As a senior British development worker, Jon Bennett, told the BBC after the quake, UK government investment in preparing Nepal for the inevitable ran into its “problem of attitude”. Their mindset is “fairly fatalistic”, he said, describing the difficulty of “trying to get some kind of enthusiasm for preparedness”.

If Nepal is to build back even a little better, it must believe it is not fated to be vulnerable.