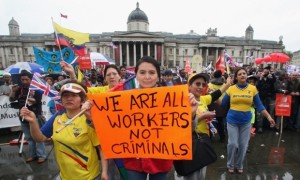 Did you know that immigrants can actually help the natives excel?

I got this off Noah Smith’s thought-provoking Bloomberg View piece on Wisconsin Governor and potential presidential candidate Scott Walker’s suggestion that limiting legal immigration may protect American jobs. (Before any fans of his get cross, the Governor implied as much in an interview with Glenn Beck and the actual words he used are at the foot of this blog).

Anyway, Mr Smith, who’s an assistant professor of finance at Stony Brook University, came up with a number of interesting reasons that limiting migration won’t do much to protect American jobs or wages.

But then he pointed something far more interesting. How there’ve been several studies that indicate “immigration actually increases wages for the native-born.”

He mentions a new study by the economists Giovanni Peri, Kevin Shih, and Chad Sparber, which says that migrant workers mean the native-born get to become managers. It figures.

(Here’s what Governor Walker said in his interview with Glenn Beck:

“In terms of legal immigration…the next president and the next congress need to make decisions about a legal immigration system that’s based on, first and foremost, protecting American workers and American wages, because the more I’ve talked to folks, I’ve talked to Senator Sessions and others out there — but it is a fundamentally lost issue by many in elected positions today — is what is this doing for American workers looking for jobs, what is this doing to wages, and we need to have that be at the forefront of our discussion going forward.”)