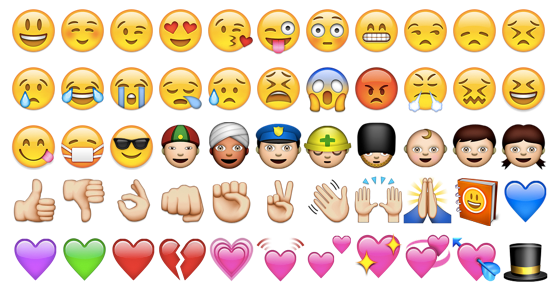 Who would’ve thought it but apparently Emoji, the small icons used to express emotion electronically, are the new lingua franca, the 21st century’s English without words.

Instagram said so on Friday (though not in quite those words) and a New York Times blog has picked up on the Facebook-owned photo-sharing app’s finding that nearly 40 per cent of all text posted to Instagram contains at least one Emoji in the photo caption; in countries like Finland it’s more than 63 per cent and in much of Europe, the little ideograms are “present in more than half of all Instagram captions.” That’s what Mike Isaac’s NYT post quotes Instagram to say.  Click here to read why Mr Isaac is less “snobby” than he used to be about using the “collection of happy faces, kissing lips, cigarettes and piles of feces that come in the form of a pictographic keyboard on our iPhones and Android devices.”

He’s part of the hordes, apparently. Across the world, there’s a stampede to reach the pictographic keyboard and illustrate what you want to say without words.

Instagram software engineer Thomas Dimson has written a company blog post on the phenomenon. “It is a rare privilege to observe the rise of a new language,” he says, “Emoji are becoming a valid and near-universal method of expression in all languages.”

Mr Isaac helpfully weighs in with the observation that “emoji, however inelegant as they may seem, have become a language of their own, a way to transcend the limits of one’s native tongue to communicate with others worldwide.” He adds that all of us are probably “seeing fewer instances of ‘Lol’ on Instagram photo captions, while smiley face emoji are becoming more prevalent.”

Really? Should we believe Isaac/Dimson/Instagram or the evidence of one’s eyes and habits?

I don’t know about you but I’ve used a smiley face for a long time. Mostly because it’s easy to create one 🙂 by means of a colon, a hyphen and a bracket.

I’m not sure if the occasional or even frequent use of Emoji (smiley or otherwise) in an email or text message signifies the “rise of a new language”, a 21st century return to pictographic forms of communication.

Once again, it’s that pretentious diction that Orwell warned against, in which everything is seen as epoch-making, phenomenal, historic or remarkable. At the risk of sounding overly downbeat, the use of Emoji is an interesting trend, no more, no less.

More soon. Language – and the words used to describe it – continues to confound us.