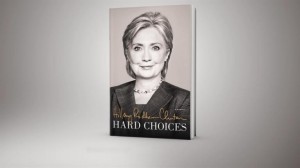 Like most politicians, American or otherwise, Hillary Clinton has a problem with telling it like it is. Saying what she really means. Clarifying things so much that people won’t feel hopeful enough to vote for her.

That’s the jargon-free way of explaining why she said this, for example, on her first official campaign stop in March.

What did she really mean?

If you didn’t have to pay tuition, you would still need to find money to pay for study materials. And that there is no guarantee that you will have no tuition to pay. In other words, COLLEGE CAN NEVER BE TOTALLY FREE.

That’s plain English but it’s not the sort that creates hope enough to attract votes.

I would say that she is using a technique that George Orwell has called verbal false limbs. He described it as follows: the elimination of simple verbs (stop, spoil, break, kill) and making it a phrase with a noun or adjective tagged on. Examples are render inoperative, militate against, be subjected to, give rise to, play a leading part in. Add to that the tendency to use the passive voice rather than the active (by examination of instead of by examining) and altogether, it seems to be an attempt to give, as Orwell writes banal statements an appearance of profundity.