Known unknowns: Why America ‘does god’ with a fervent vengeance 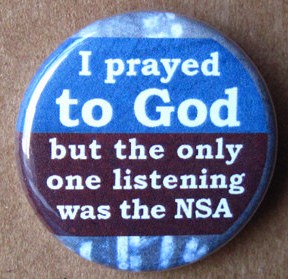 American voters ‘do’ god with a fervent vengeance. It is, of course, ‘one nation under god’. Every major speech by the US president will end with ‘God bless America’. As Kate Cohen writes in ‘The Washington Post’, “religious rhetoric is so compulsory in the United States that it’s anyone’s guess what candidates actually believe.”

She goes on to say that American politicians have a choice: “Either end your speech with ‘God bless America’ or end your political career.” Click here to read the piece, but if you don’t here’s a key point:

“Surveys rank atheism as the trait most likely to turn off potential voters, and atheists are the least trusted group in the United States, less than, say, gay Muslims who never call their mothers.”

‘Do god’. It’s an interesting phrase and became popular in the UK a decade ago, when former prime minister Tony Blair’s media chief Alastair Campbell told a journalist, “We don’t do god”. This, despite his boss being quite prepared to ‘do god’ publicly and with a vengeance. But Mr Campbell judged – correctly – that the UK doesn’t like politicians who ‘do god’.

The phrase is, of course, a modern take on simple, honest belief. But what place, if any, should god have in the political sphere? George Orwell, who passionately disliked Catholicism and considered it appalling that Catholic writers were so vitriolic about atheistic communism (in Spain, Russia, elsewhere)  believed that religion would always be key.

“When one’s belly is empty, one’s only problem is an empty belly. It is when we have got away from drudgery and exploitation that we shall really start wondering about man’s destiny and the reason for his existence. One cannot have any worthwhile picture of the future unless one realises how much we have lost by the decay of Christianity,” he wrote.

The English language has more phrases with god in them than one thinks. Free dictionary lists 50 or so  (below) but there are many more.