Known unknowns: Lablabi, the soup-stew that sounds like it tastes 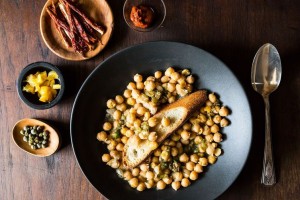 When I heard about Lablabi, the Tunisian chickpea and bread soupy stew, it seemed one of the most magically onomatopoeic names for a dish.

You know the sort that lets you taste the sound before you dip your spoon into the steaming bowl.

Like a bottle of fizz or crisp lettuce, you can imagine what you’re likely to get before you do.

As The Wall Street Journal headlined a piece on Lablabi some years ago: It’s “a soulful bowlful”.

Lablabi is Tunisian street food and versatile in the way that most one-pot dishes are.It’s got slightly stale bread (torn into the bottom of a bowl) with steaming chickpea broth, sharpened with harissa and rendered unctuous by olive oil poured over. There’s a sprinkle of ground cumin. Garnishes can range from capers to yoghurt to preserved lemons. Often, Tunisian street vendors coddle an egg in the hot chickpea broth.

As Molly Stevens put it in the WSJ, “In Tunisia, lablabi stands are as ubiquitous as hot dog carts are in US cities and they stay open all hours.” The recipe she provided is at the bottom of the page.

But “soulful bowlful” is a good description.

The language of food says as much as what you put in your mouth, according to Stanford linguistics professor Dan Jurafsky, whose book ‘The Language of Food: A Linguist Reads the Menu’ was published last year.

He described restaurant menu language as follows, in a fascinating piece for ‘The Financial Times’: “We computationally analysed thousands of US menus and found we could predict prices just from the words on the menu. Again, the more expensive the restaurant, the fancier the words. Difficult foreign words (‘tonnarelli’, ‘choclo’, ‘bastilla’, ‘persillade’, ‘oyako’) are an implicit signal of the high-educational status of the menu writer and, by extension, the customer. But we also found that expensive menus were shorter and more implicit. By contrast, the wordy menus of middle-priced restaurants were stuffed with adjectives (‘fresh’, ‘rich’, ‘mild’, ‘crisp’, ‘tender’, ‘golden brown’), while positive but vague words such as ‘delicious’, ‘tasty’ and ‘savoury’ were used by the cheapest restaurants.”

Lablabi tastes best when made with dried chickpeas, as the beans create their own delicate broth while they simmer, but if you don’t have the time to cooked dried beans—which takes about 1 hour—a canned version will substitute. A filling meal in itself, the soup can stand alone or be paired simply with a light, crunchy salad and mint tea.

1. Drain the chickpeas. Put them into a medium soup pot with 2 quarts water. Add 3 garlic cloves and the bay leaf. Bring to a simmer over medium heat. Cover, adjust to a very gentle simmer, and cook until barely tender, about 45 minutes. Add 1½ teaspoons salt and continue simmering until tender, another 15 to 30 minutes. Discard the bay leaf. If you wish to work ahead, the chickpeas may be cooked, cooled, and refrigerated for several days at this point. (If using canned chickpeas instead of dried chickpeas, combine chickpeas with 6 cups water or broth and proceed with recipe starting with step 2.)

2. To make the soup: Mince remaining garlic cloves and add to the chickpeas along with 2 teaspoons cumin and the harissa. Cover and simmer gently for 25 minutes.

3. Meanwhile, prepare the garnishes. Tear the day-old bread into small bite-sized pieces. Rinse the preserved lemon and remove its seeds and, if desired, the pulp. (You may eat only the rind or the rind and pulp). Cut rind in half lengthwise and slice thinly. If using eggs, poach them until the whites are just set (about 3 minutes) and transfer to a bowl of cool water until ready to serve.

4. Add 3 tablespoons olive oil and the juice of half a lemon to the soup, simmer for another 5 minutes. Taste. The broth should be seasoned but not overly salty, as some of the garnishes are salty.

5. To serve, divide bread among 4 deep soup bowls. Ladle hot soup and chickpeas over the bread. Settle a poached egg on top, if desired. Garnish each bowl with several slices of preserved lemon, chopped parsley, sun-dried tomato, capers, a dollop of harissa, a pinch of cumin, a drizzle of olive oil and the remaining lemon juice. (Alternatively, arrange all the garnishes in small dishes on the table, and invite everyone to top their own bowls.) Stir the soup, breaking up the egg and distributing the garnishes, before eating.