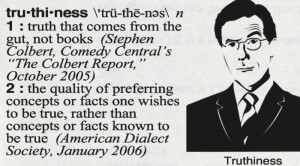 Fifteen years after “truthiness” was named word of the year by the American Dialect Society, what chance for “mathiness”?

It’s a good question, in the light of University of Chicago behavioral economist Richard Thaler’s argument that economists increasingly suffer from “theory-induced blindness”, ignoring real-world phenomena because they don’t accord with the dominant mathematical models. Justin Fox says as much in his insightful piece on Bloomberg View. Click here to read it.

But if you don’t, consider some of the highlights of the argument.

Mr Fox says that New York University professor and economic theorist Paul Romer has been complaining about “mathiness”, which means that economists “are using mathematical models not to elucidate or investigate but basically just to assert.”

He quotes Mr Romer’s claims that we’ve reached the point where “presenting a model is like doing a card trick. Everybody knows that there will be some sleight of hand. There is no intent to deceive because no one takes it seriously. Perhaps our norms will soon be like those in professional magic; it will be impolite, perhaps even an ethical breach, to reveal how someone’s trick works.”

Okay, so most of us aren’t economists. How do we decode this? Fitting the facts to formula? Shoehorning stats into a set template? Tricking the credulous public?

Truthiness, remember, was coined by American television comedian Stephen Colbert and it was thought to signify something that “feels right” rather than logically proved to be so.

What does“mathiness” mean? Something that appears to be proven?