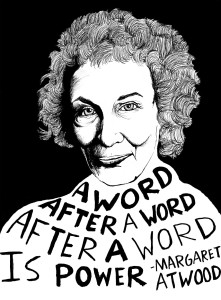 In the beginning was the word. In the future, or at least the Future Library time capsule there will be the story. In particular, Margaret Atwood’s secret story. The one that the celebrated Canadian author added to the vault in a special room of the new Deichman Library in Oslo, which will hold the works of 100 authors for a 100 years.

Ms Atwood is the first author to submit her work, which she says could be a story, or “just a word” or anything at all. The point about the literary time capsule seems to be that humankind will leave stories for future generations, an investment of hope and faith in our species.

Ms Atwood has said that it’s a powerfully hopeful idea to believe that there will be future readers. As she points out, this belief was not part of the calculations of the man who goes by the title ‘Snowman’ in her futuristic, post-apocalyptic book ‘Oryx and Crake’. He did not keep a diary. He did not believe that mankind had a future. And that it would involve words.