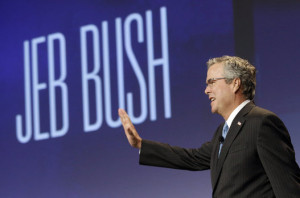 Jeb Bush deserves everyone’s sympathy (but not necessarily their vote) because one can’t choose one’s blood family but one can pick one’s words carefully.

But every linguistic formulation can’t change the fact that Jeb has an older brother named George ‘Dubya’. Who happened to be US president. And launched the Iraq war. With all the consequences that we can see in the Middle East and around the world today.

So to fitting language around family loyalty.

Consider the problems that Jeb has been having answering this seemingly simple, straightforward question: Was going to war in Iraq the right thing to do?

When Fox News’s Megyn Kelly asked him if, knowing all we know now, he would have gone to war, Jeb replied as follows:

The answer pleased no one (including conservatives who had supported George W Bush’s foreign policy) so Jeb issued a re-wording four days later, full of a tortuous mix of the first-person singular and plural with the second person. He said the following:

“Knowing what we know now, what would you have done? I would have not engaged. I would not have gone into Iraq.”

There you go. That should be clear enough, shouldn’t it?

Except that it’s not.

There is no right answer, not for the Republican Party because it can’t really admit the Iraq war was a foolishly muscular adventure for fraudulent reasons.  Accordingly, the Wall Street Journal prescribes a different linguistic focus when discussing the question. On its editorial page, it suggested evasion. “The right answer to the question is that it’s not a useful or instructive one to answer, because statesmanship, like life, is not conducted in hindsight,” wrote the WSJ.

That’s telling it like it is, I guess. To the extent one can.