Language and the lawn: Don’t ban it; make it seriously un-cool 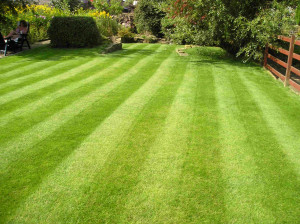 Language can accomplish things that the law cannot. Accordingly, consider this. Lawns don’t deserve to be banned. They should merely become unfashionable. (Like smoking in the presence of a child or a pregnant woman. Like wearing real fur. Or buying ivory.)

Certainly lawns should be highly unfashionable in California, which is parched by a four-year drought.

And in the Middle East.

And in several other bone-dry locations on the planet, where water may be scarce but green sward is not.

Let’s take Lusaka, capital of Zambia in sub-Saharan Africa, which has the largest number of water-stressed countries of any region.

Zambia has water problems and Lusaka suffers the effects of receding underground water tables and erratic and/or delayed rainfall.

But Lusaka still has many emerald lawns, private and public. And its public plantings fairly rejoice in them, as I remember from my visit a few years ago.

There’s got to be something wrong with that picture. Yes, and it’s those green lawns.

Anyway, so back to language and the lawn. It should be relatively easy to deglamourise the concept of a lawn. As an import. As imitativeness. As utterly Eurocentric.

For, the idea of grass lawns is foreign to everywhere, except Europe. They became popular with the aristocracy in western Europe possibly around the 1400s or 1500s. There, they were no problem – the climate seemed well able to sustain green expanses of grass. But their introduction in the US (in the 1800s), India and the sub-continent and Africa was not particularly sustainable. A recent article in OZY quotes the US Environmental Protection Agency to say, of the approximately 320 gallons of water that the average American household uses every day, 15 per cent goes to lawns and gardens, which adds up to about 9 billion gallons per day throughout the country. Matthias Ruth, professor of civil and environmental engineering at Northeastern University, tells the writer that maintaining a lawn is “simply trying to sustain what we know isn’t sustainable”.

The answer is clearly for a green lawn (in California or Lusaka or Delhi) to become as unfashionable as a large-scale Victorian-style formal parterre, complete with topiarised peacocks.

This is not quite as much of a revolution as it sounds. In the northern California city of American Canyon front lawns are banned for new houses. Similar attempts have been made in Iowa. And the Los Angeles Department of Water and Power is offering cashback for every square foot of lawn that’s replaced by succulents, native plants, gravel and so on.

For those who still want the grassy look, there’s always artificial turf.