Narendra Modi’s use of words – too many, in too controlled situations 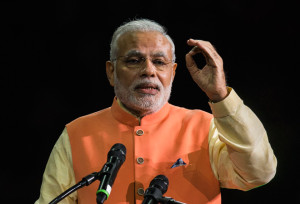 Narendra Modi’s use of words is not as much of a success as the hype – and his fan club – might suggest. Particularly if you go by the muttering about his voice, words and message being too much with us in his first year as prime minister of India.

As Sandeep Bhushan wrote in his excellent piece in Siddharth Varadarajan’s recently launched ‘The Wire’: “In Modi’s utopia, which just celebrated its first birthday, ‘big brother’ is always speaking to you. Promising, haranguing, beseeching, preaching and finger-pointing.”

Bhushan goes on to point out that the Indian prime minister prefers to be heard using state-controlled media. “He prefers to speak to the people via Doordarshan, AIR (‘Mann ki baat’), or his twitter handle. Only DD and ANI travel with him when he goes abroad; to which one may add PTI when he wants to speak to the Indian public at large…Every kind of government media is being used to spread the message.” This includes India’s first ‘Kisan’ channel, which delivers the 250-million strong farmer constituency to Mr Modi as a fairly captive audience.

Mostly, India’s prime minister shuns the country’s non-state media, preferring foreign journalists instead. But this is not unusual in leaders of a certain, shall we say, authoritarian bent, anywhere in the world, who seek to be above well-informed scrutiny. This is not to say that the foreign media is ignorant about issues; it’s just not likely to be as passionate or close-focus.

But what’s particularly striking about Mr Modi’s use of words is, as Bhushan describes, his dismissive term for the media: new

Everyone sings paeans to the immediacy, power and democratization of news by social media, but Mr Modi’s first year probably illustrates the perils of sidelining the mainstream media and allowing the babble and blare of social networks to dominate. Social media amplifies both groupie-ism and gangsterism; group hugs and group hate. And it allows leaders like Mr Modi to drone on…and on…and on. No spin and twitterthons will change that.